Home Sports How Is The NFL Using RFID Transmitters?
Sports

How Is The NFL Using RFID Transmitters?

What another exciting round of the NFL we just witnessed! If you haven’t kept up with the latest results from this game week, then we will do a quick round-up right here.

The Green Bay Packers faced off against the Kansas City Chiefs, and without starting quarterback Aaron Rodgers, the Packers really did look awful, as they lost 13-7.  The Denver Broncos have had a fairly mixed season so far, so they weren’t expected to get much, if anything, out of their game against the in-form Dallas Cowboys. However, the Broncos clearly have the Cowboys’ number, as they romped home to a 30-16 victory, which was their 7th straight win against the team from Texas.

One of the most surprising results of the weekend was in the game at the Highmark Stadium, as the Buffalo Bills took on the Jacksonville Jaguars. The Bills had won 5 of their 7 games so far, whereas the Jaguars had managed just a single victory in their match played over in London against the Miami Dolphins. However, in a shallow scoring game, the Jaguars upset the odds, winning 9-6. For anyone who had searched for the best online sportsbook deals and taken a punt on the Jaguars winning this game, they would have been pleased with the outcome.

When watching the NFL, whichever network you happen to be viewing, you’ll notice that they managed to produce a number of statistics and data sets that seem to see just how well a player is performing. It seems incredible that the networks seem to essentially relay this information in real-time, so the audience at home almost feels like one of the team’s dedicated analysts, having access to all this technical data. How is it possible to track the players? It is through the use of RFID Transmitters.

If you have never heard that term before, we’ll attempt to describe them as simply as possible. An RFID (radio-frequency identification) system has three components. A small radio transponder, a radio receiver, and a transmitter. RFIDs then use electromagnetic fields to help identify and track the transponder before digitally transmitting data to the reader.

It is this technology that helps track payments made by credit cards or debit cards much more securely, as now banks can see precisely where payments have been made, flag up to users if the location seems suspicious, and potentially block the payment from going through, all in a matter of seconds. It also helps retail stores, who fit electronic tags to their clothes, which will set off alarms when items are taken through an RFID barrier if the transmitters haven’t been removed. It has saved companies millions of dollars in what would have previously been classed as lost or stolen stock.

Hopefully, you’re still with us, and if so, you will probably be asking exactly how this all works in the NFL? Well, read on to find out a little bit more about how RFID Transmitters work in the world of American football.

Every player now fitted with an RFID chip 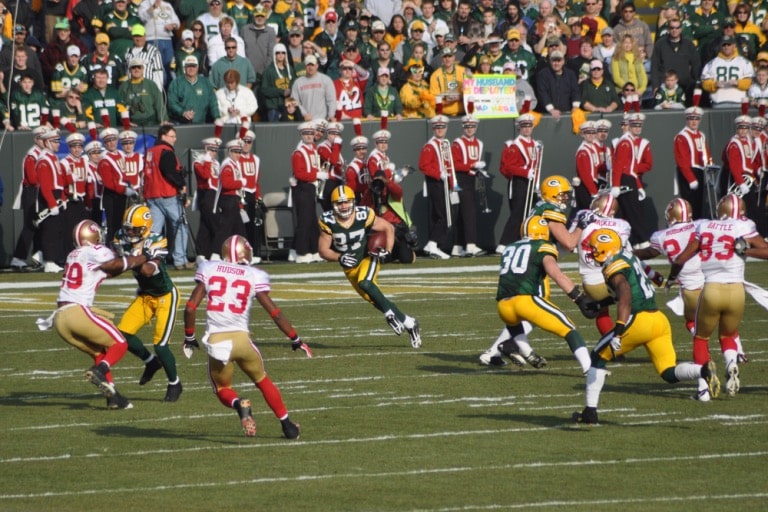 Because of the impactful collisions that most of the NFL players go through each game (excluding the kickers, who usually make it through without being smashed by anyone), they are all fitted with shoulder pads, which help soften the blow of any hard challenge. It is within these shoulder pads that RFID chips have been implanted. They are roughly the size of a quarter, only weigh a few grams, and are buried deep enough to not get dislodged during the game or receive such an impact that the data being transmitted back becomes unreliable. To most players, they would barely be able to tell they were there.

Then, around every single one of the 32 stadiums that hosts an NFL franchise, there are 20 receivers that pick up the signals that the chips are emitting. Roughly, each chip will send 25 signals per second.

Who is behind this technology?

Zebra Technology, a Chicago-based tracking solutions company, is the people who have sold this tech to the NFL, and they are the ones who receive the signals to their servers, which is based in their command center out in San Jose, California. From there, it is processed and sent back to the broadcasters automatically, all in under a second.

What will this mean for the average NFL fan? It will give them a much more in-depth viewing experience than ever before. In addition, NFL coaches can also use this data during practice sessions to monitor their players’ performances in real-time to see who is looking in good shape and who isn’t and make vital tactical decisions based on the data provided by Zebra.

It is one of the biggest technical innovations the NFL has seen for years, and we can confidently say that the use of RFID Transmitters in the sport will only continue to grow in the seasons to come.

Is Michigan A Good Place To Start A Business?

What Does SR-22 Insurance Cover?

How Fit Do Formula One Drivers Need To...

Why Do People Watch Sports?