Giant-sized games take the adage of go big or go home quite literally. Wholeheartedly embracing a ‘bigger is better’ mentality, plus-sized games have one rule; size does matter. Forget about practicality or silly size limitations. From large slot machines in an online casino to sprawling checkerboard mats, these supersized games are big, bold and beautiful.

Puns and sayings aside, giant games are rapidly becoming the ideal format for parties and gatherings. Read on to find out our ten best picks for the biggest games to play with friends and family. We’ve split our list into two categories; board games and lawn games. Each category contains five games, all of which have been ordered alphabetically for the sake of convenience.

Set in a pre-World War II era, Attack! is a historical board game focused on strategy and tactics. It’s one of the simpler war games on the market and is suitable for anyone aged ten and up. Two to six players can play at once, with each game usually taking about two hours to complete.

Without its various expansions, the original game map is 10 inches across. Expansions can easily extend that size to over 30 inches of playing space. Attack! Features more than 100 pieces per army, multiple factions to choose from, and bases its gameplay around an important period in world history.

Candyland is a racing board game that is suitable for all ages. Players pick a piece and try to make it to the end of the board first. In Giant Candyland, players become the pieces, and the board gets an extra-large upgrade.

You’ll need a spacious play area to fit this 64-inch game board. Giant Candyland is ideal for kids. They will love the bright colors and cartoon illustrations. It’s incredibly easy to learn how to play and is especially popular as a birthday party attraction. 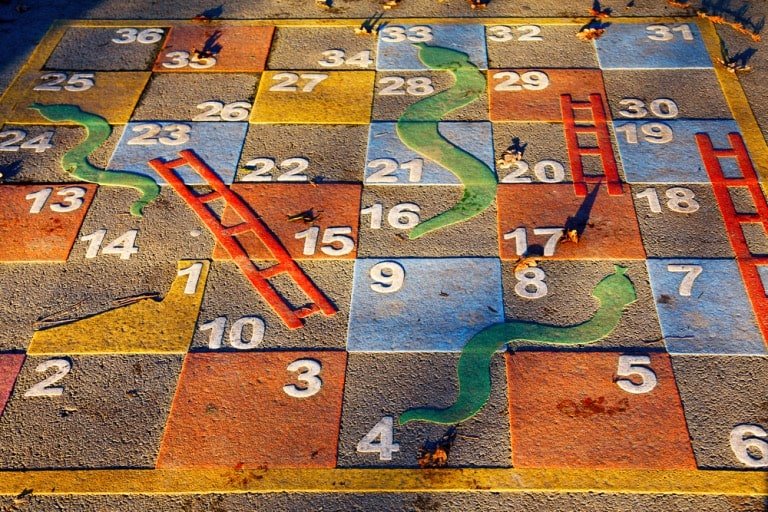 If product reviews are anything to go by, Giant Snakes & Ladders is one of the most highly-rated games ever made. When it comes to family-friendly entertainment, this ancient Indian game is one of the oldest ways to have a good time. Evidently, slippery snakes and lifesaving ladders are a lot more fun when they’re lifesized.

For those unfamiliar with how to play, the aim of the game is to reach the end of a 100-square board. Each player takes a turn to roll the dice. Landing on a snake will impede your progress, blank spaces are safe to land on, and ladders provide shortcuts on your way to the top. Simple as a concept but extremely effective in execution.

Railways of the World

First published as Railway Tycoon in 2005, Railways of the World is the latest edition of everyone’s favorite train game. In an effort to make their game more accessible for a wider audience, Eagle Games streamlined their flagship product, changed the title, and added expansions for hardcore gamers.

Railways of the World has over 150 plastic miniatures and caters for up to six players. There are multiple maps available, each with its own setup and rules for victory. A standard board tile takes up 12 x 12 inches. Suffice to say, if you don’t own a massive table, you’re better off playing this one on the floor instead.

War of the Ring

War of the Ring takes place in the Lord of the Rings universe. J.R.R. Tolkien’s famous fantasy series has been portrayed in various forms of media, but this is the only authentic board game where you’ll find Frodo, Gandalf, and the Fellowship of the Ring.

One player takes control of Middle Earth’s Free People, while the second player leads Sauron’s Shadow Armies. The journey of the Fellowship of the Ring forms an integral part of the game, creating an organic cat-and-mouse dynamic between players.

A game of chess typically doesn’t require much in terms of physical activity. Giant Chess, on the other hand, requires quite a bit of exercise and offers a fun workout for both your mind and body. Pieces of a Giant Chess Set can range in size from 8 inches all the way up to 30 inches.

Giant Chess can be played on a variety of board sizes. A temporary play area can take seconds to set up, but there are more permanent options available. Many resorts and parks around the world have permanent fixtures, as Giant Chess is a regular attraction for many people. 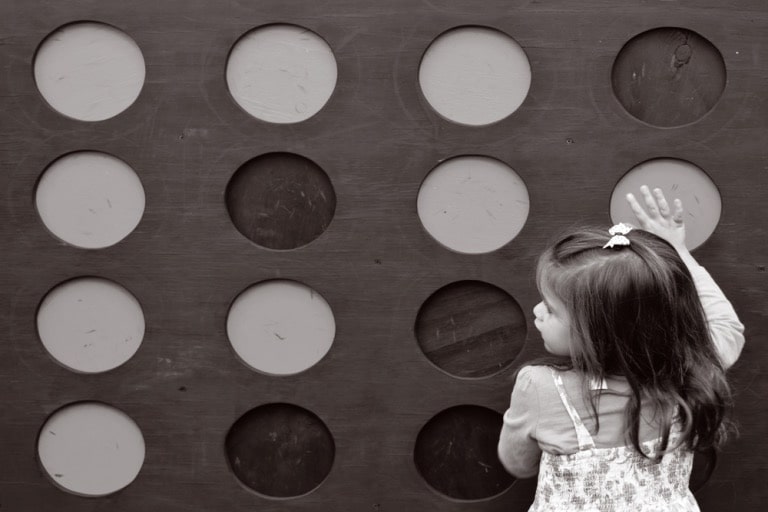 Connect Four is known by many different names, such as Four Up, Plot Four, or Four in a Row. Some of us call it Captain’s Mistress, while others know it as Gravitrips. No matter what it’s called or where it’s played, Connect Four’s successful simplicity has made it instantly recognizable to the vast majority of us.

Thanks to its inclusion in Hasbro’s range of ‘Giant’ party games, Giant Connect Four gets a 50 x 50 inches size upgrade. Though it’s a two-player game, each round doesn’t last too long. Playing ‘winner stays on’ or using a tournament format can easily satisfy up to eight players.

Twister, the game known for awkward poses and bursts of hilarity, is joining the giant game revolution with Giant Twister. Now you can have more players than ever before and become an entangled mass of limbs with a much larger play area.

Giant Twister either comes in the form of a flat sheet or an inflatable version. While the flat version retains the original game’s simplicity, the inflatable version can be played in a pool, and at the very least, provides a comfortable fall at the end of a game.

Who would’ve thought stacking blocks would become so popular as a pastime? With Jenga Giant, players have to make sure their perceptive skills are up to scratch. A ‘standard’ game starts off at the height of 22 inches and, after a few turns, that height can quickly grow up to five feet or more.

Jenga rose to fame in the 90s, and in 2020 it joined New York’s National Toy Hall of Fame. That’s a remarkably short amount of time for such an achievement, especially when compared to other classic games such as Connect Four or Chess.

Ideal for any outdoor event, Giant Yard Pong is fun for all ages. Pong has come a long way from college drinking games, and Giant Yard Pong is now available as a fun, family-friendly alternative. Instead of cups, you get buckets, ping pong balls are replaced by tennis balls, and you’ll need a lot more space than the average dining table can provide.

Despite its significant upgrades, Yard Pong retains the simplicity of its predecessor. From the balls to the buckets, all elements have been carefully upscaled in exact size ratios. It’s still the college pastime we all know, just on a much larger scale.

How to Effectively Track Spending When Constructing a New House