What Causes Corrosion on Battery Terminals?

Batteries are crucial for operating several car systems such as your headlights, ignition, and, not to mention, powering the engine.

Now, several issues can hinder your car battery’s performance. One of them is battery terminal corrosion.

I remember trying to start my car several times before deciding to pop the hood up and lo and behold, white powdery material was all over the battery terminal. Luckily, there are lots of solutions and prevention methods to fix battery terminal corrosion.

Stick around to learn about what causes battery terminal corrosion and how you can deal with it.

What Is Battery Corrosion?

Battery terminals play a crucial role in a car battery’s function. They’re highly conductive, so they can interlink a car’s electric operation to its battery. If your battery terminal is corroded, it cuts off that link.

Corrosion occurs when battery acid is exposed to the metal of the terminal. It can also be due to acidic gas clearing out of the battery.

When you think of corrosion, you might be thinking of rusted parts and brown spots. Nevertheless, battery terminal corrosion is more white, blue, and green.

The white material is built up of lead sulfur or it could also be anhydrous copper sulfate. The latter can turn blue if introduced to moisture. You can mainly find this substance near the copper wiring of the battery terminal.

The texture should look powdery and gritty. The amount of powder visible depends on how long the battery corrosion is left untreated.

Another clear symptom of car battery corrosion is your car not starting up since the terminal is almost void of any conductivity.

What Causes Corrosion on Battery Terminals

Battery terminal corrosion can stem from several factors. It can be due to a lack of maintenance and unstable chemical reactions. Let’s take a closer look at each cause below.

This could happen when filling the battery with water. The electrolytes can easily spill out and cause corrosion through a chemical reaction.

Battery acid produces the needed electricity to power your car. During charging, hydrogen gas can be produced from the reaction between the lead plates and sulfuric acid.

The gas can then escape through your battery’s small vents and react with the surrounding atmosphere. This’ll create a breeding ground for battery terminal corrosion.

Hydrogen gas exposure usually occurs due to overcharging or undercharging the battery. The good news is that you can identify the issue. If the corrosion is found on the positive terminal, then you might’ve overcharged, and vice versa.

Building on the last cause, overcharging can also be a likely culprit of battery terminal corrosion. If you overcharge the battery, it’ll increase its temperature.

That would lead to overheating and the release of harmful acidic gas that will trigger battery terminal corrosion.

Simultaneously, the excess heat energy can cause the battery to enlarge and spill electrolytes all over the terminal, worsening the corrosion.

Copper clamps function as a connector between your car’s battery and the electric wires. The material allows for better conductivity.

When the copper clamps are subjected to an electric current, it can create copper sulfate. The substance can be behind your battery terminal’s corrosion.

Copper sulfate will inhibit electric current, which, in turn, can disrupt your car’s ignition. You can usually identify this issue from the tell-tale blue corrosion signs.

Long battery life can take a toll on its overall electric production performance. On average, car batteries could last around five years. With ideal maintenance, the battery could last longer.

That being said, old age can make your battery more susceptible to leaks and humidity, which increases the chances for corrosion to occur.

What Should You Do If the Battery Is Corroded? 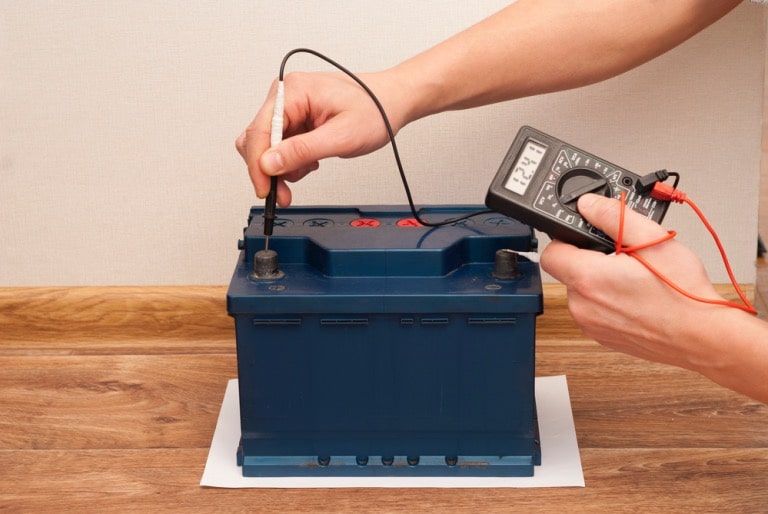 Once you notice corrosion on the battery terminal, you should be quick to clean it before it worsens.

Even though you can complete the removal process by yourself, you can also go to a mechanic for a better job. A professional hand might also be necessary in cases of leakage or if your battery is expanded.

Having said that, here’s what you should do if the battery is corroded.

Before you get started, you’ll want to first gather all the needed items to remove the corrosion. There are several methods of corrosion cleaning that need various equipment. Thankfully, most of them might already be at your disposal.

In this step, you’ll want to make sure the car is off. With your pliers and wrench, you’ll begin detaching the car’s battery cables. You mustn’t just randomly pick any cable.

In more severe cases, the corrosion might be too much and stiffen the terminal clamp making it difficult to unfasten. You can spray a specialized terminal cleaner on the region and leave it for a bit. It should become looser and easier to detach.

After removing the battery cables, you want to carefully give them a thorough check-up to make sure there are no signs of spread corrosion, wearing out, or cracking on the insulation layer.

If the insulation is open, it could potentially damage the copper wires inside. Eventually, it can hinder their function to transfer electric current and lead to your car not starting up.

Begin this step by putting your nitrile gloves on. It’s time to get all that whitish-blue gunk out with the help of a selection of cleaning solutions.

For better access, detach the car battery from the engine. It’ll avoid spilling the cleaning agents on the engine and its surroundings which could lead to further unwanted damage.

With this method, you want to prepare a baking soda and water paste mix. Next, pour the concoction over the corrosion and let it soak for around 20 minutes. This solution should be able to dissolve the copper sulfate causing the corrosion.

You’ll want to then use the wire brush to scrub out as much of the corrosion as possible. Wash away the residue with water and let it dry

This method is simpler and much more effective than a home remedy. With a battery cleaner spray, you’d be cleaning the corrosion and neutralizing acid levels. All you have to do is apply it to the corroded battery, wait a few minutes, and clean and dry it off.

Finally, retrace your steps by attaching the “POS” and “NEG” cables with the positive and negative terminals, respectively.

How to Prevent Battery Corrosion in Cars in General?

You can lessen the chances of battery corrosion with a few simple prevention methods. Check them out below.

Semi-truck Weight and Specs: All You Need to Know!

Best Christian Movies on Hulu: 7 Picks to Feed Your Soul!

Personalizing Your Car Made Simple with This Helpful...

Should You Buy a Wrecked Car?

What to Consider Before Getting an Electric Car?

What to Do After Buying Your Dream Car?

How To Choose the Right Truck To Meet...

Five Reasons Why Driving With Worn-out Tires Is...

How To Keep Your Car Paint From Fading？