Most drivers understand the need to drive with caution and attentiveness. But even if you have an excellent driving record, accidents can still happen to good drivers. Truck accidents occur without warning and sometimes, it may not be the injured party’s fault. Nonetheless, every driver should do their best to drive responsibly on the road.

Moreover, it’s crucial to realize that a truck collision can happen in various ways. Accidents occur, for example, when a semi-truck or trailer blows out a tire, which can cause the driver to lose control. However, collisions involving compact vehicles are more likely to result in tragic outcomes. Smaller cars are clearly at a disadvantage due to the size disparity. That said, here are some of the common types of truck accidents:

Furthermore, underride accidents can happen as rear crashes or lateral crashes. Rear crashes are when the smaller vehicle hits the back of a truck trailer because the truck suddenly came to a halt or slowed down. The smaller vehicle may wind up beneath the large truck if the impact is significant enough. Moreover, they can also occur as lateral collisions, in which a car slips beneath the trailer on the side, causing the smaller vehicle to become pinned behind the trailer. Both types of underride incidents can cause severe injuries and even death.

Therefore, truck drivers need to drive responsibly while on the road because doing so can dramatically reduce the frequency of rollover accidents. 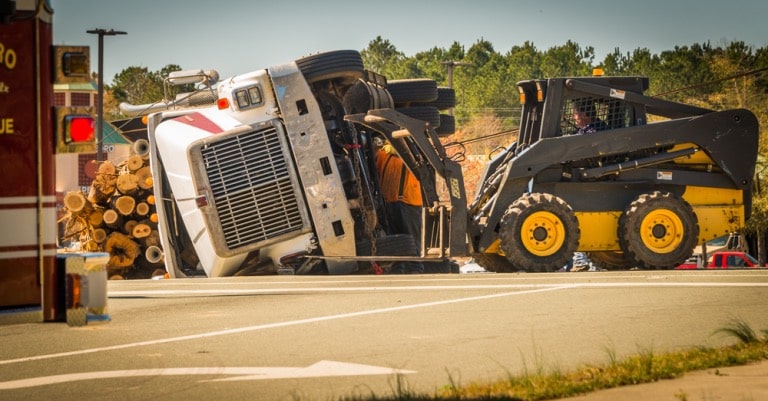 Head-on collisions are relatively common and can be caused by several factors. When a head-on collision occurs, it’s usually the case that one of the drivers was negligent because they would’ve ended up in the wrong lane at the wrong time. Here are some scenarios to consider:

These are also known as ‘side-impact accidents’ and usually happen near traffic intersections. If a truck passes a red light or a stop sign at a junction, it may collide with other cars on its side, forming a T-shape. Impaired or irresponsible drivers may run through intersections, resulting in T-bone accidents. These accidents could be fatal for the passengers on the side of the impact.

Typically, every vehicle has some blind spots that drivers should be constantly aware of. Trucks are no exception. Sideswipe accidents happen when vehicles are traveling side by side in the same direction. They usually collide because a driver fails to check their blind spots before trying to switch lanes, leading to a side collision. But also, the truck driver could lose control of their vehicle due to intense wind, tire blowouts, and bumping into road obstacles, causing side-swap accidents.

There are many ways in which truck accidents can occur. But it’s incumbent upon truck drivers and every road user to drive responsibly to prevent these accidents. Most accidents can be avoided by driving correctly on the road, but others may not be so easy to control.

Nevertheless, suppose you do get into an accident and incur injuries. In that case, it may be a good idea to contact personal injury lawyers to file a claim for damages because you shouldn’t have to incur the cost of damages that aren’t your fault. These attorneys will guide you through the entire process and ensure you get a fair settlement on your claims.

U.S. Cool Cat Casino: How to Register and Start Playing?

Here’s How a Credit Card Could be a Lifesaver

Caltrans’ Claims Procedure: How To File a Claim...

What Qualities Make a Lawyer Great?

What Are the Types and Causes of Motorcycle...

5 Important Questions To Ask When Hiring a...

5 Factors to Consider Before Hiring a Bicycle...

Damages You Can Collect After a Motorcycle Accident

Child Custody for LGBT Parents: What You Need...

Top Things to Consider Before Filing a Personal...